The unit was first announced[3] in December 2012 by Vince Cable MP. It is funded by the Intellectual Property Office.

The Unit was set up with £2.65 million from the government, through the IPO.[4] In a parliamentary question, the Shadow Minister for Home Affairs, Baroness Neville-Jones said the plan was to have the Unit funded by industry stakeholders after an initial period.[5]

Operation Ashiko is a partnership with Nominet, as can be seen from their template notice, which addresses the domain registrar and Nominet.[11]

PIPCU have roughly doubled the number of suspension requests they make each year, reaching over 13,000 in 2016-17 according to Nominet’s annual report statistics.

PIPCU sends details of websites that they allege are infringing trademarks and are engaging in fraud. The sites can therefore range from sale of grey market goods, through to counterfeit drugs and attempts to gain access to credit card details, or simply to take payments without any intention to supply anything.

The notifications directed to Nominet state that:

PIPCU also attempt to give Nominet a legal incentive to taking action, by asserting that:

Section 328 is being used by PIPCU to assert that—once Nominet are made aware—continuing to supply or allow a domain registration could be an offence, as it constitutes making “arrangements” for use of criminal property.

They state in their notice that

“Websites are brought to the attention of the Police Intellectual Property Crime Unit from other Law Enforcement agencies, Various Trading Standards Departments, industry and the general public (often after they have become victims themselves). These reports are then researched and an assessment formed regarding the level of criminality. Only Websites/Domain names that meet a required threshold are then targeted.

“Most of these Websites/Domain names are controlled by Organised Criminal Networks (OCN’s) and/or are linked to other Websites/Domains also engaged in this type of criminality.

“The registrant or the person(s) controlling these Websites/Domain names is committing offences relating to Section 2 of the Fraud Act 2006.”[14]

While the notice asserts that standards of evidence have been met, the notice does not provide for an appeals mechanism, nor suggests that domain owners ought to be contacted for a response, nor sets out the evidence, nor shows nor expects any court supervision in issuing the takedown notices.

Although PIPCU’s objective is to protect consumers from buying low quality fake goods, or becoming the victims‘ of fraud, domain suspension is open to some obvious criticisms.

In particular, suspended domains appear to a visitor to have simply disappeared, leaving a victim of crime unable to ascertain what has happened. Nor are they given any warning about what they have been victims of, nor are they able to report crimes or supply evidence to the police.

From this perspective, domain seizures along with clear notices would offer victims and the public much greater transparency and accountability. This approach may require PIPCU to take legal responsibility for the seizure, which may be best met through legislative change. The forthcoming Consumer Protection Cooperation Regulation would be an opportunity to develop a safer and more accountable approach.

Operation Creative seeks to disrupt or stop copyright infringing activities. One of the measures taken is to issue domain suspension requests. These are often directed to overseas operators with little or no knowledge of the UK legal system.

If a website fails to comply and engage with the police, then a variety of other tactical options may be used including; contacting the domain registrar to seek suspension of the site, advert replacement and disrupting advertising revenue through the use of an Infringing Website List (IWL).[15]

The notification for Operation Creative tells domain registrars that they should take action under the ICANN 2013 Registrar Accreditation Agreement:

under the 2013 RAA it is the Registrar's affirmative duty - not the registrant's -- to investigate and respond appropriately (Section 3.18.1) to reports of illegal activity. Merely passing on the complaint to the registrant (particularly one who is engaged in the illegal activity) does not, standing alone, constitute an adequate investigation as to the nature of the claims, and in our view, would not constitute compliance with the requirements of 3.18.1. …

PIPCU is aware that registrars cannot be expected to be experts on copyright matters and associated laws, and for that reason, PIPCU will assist any registrar to explain which laws and regulations are considered applicable under Section 1.13 of the 2013 RAA, and explain how any domain names are (or are not) in violation of UK laws and regulations.

Whilst PIPCU will provide advice with regards to UK laws and regulations, PIPCU is satisfied that the offending website is operating in contravention of those laws and that failure to take action on your part will constitute a breach of the 2013 RAA and that a report to ICANN will be made noting this failure.[16]

The duty is set out in clause 3.18, while 1.13 defines illegal activity as including “applicable law”. However, 3.18 creates a duty to investigate reports of abuse, but no particular duty to act.

Domains listed have been evidenced either in the form of a Police Witness Statement detailing the criminality and Infringement from persons representing Content Protection Organisations on behalf of rights holders for the Creative Industries.

Alternatively, some have outstanding court orders from other competent jurisdictions to enable the blocking of the sites by Internet Service Providers.[17]

Thus a Registrar could argue that PIPCU’s notices are not sufficiently detailed to constitute a valid abuse complaint requiring them to investigate.

In any case, outside of the UK, it is unclear that a Registrar should treat these notices any differently to valid complaints from copyright owners’ organisations, since in practice PIPCU’s notices are statements that they hold a complaint from these groups in the form of a witness statement.

Although it is not mentioned in the notice, the 2013 RAA would allow PIPCU to instruct UK-based registrars to respond within 24 hours, assuming PIPCU’s complaint is properly made and demonstrates that it is “well-founded”,

Their domain suspension template shows that they have been requesting redirection of domains under Operation Creative:

6. Redirect of the domain to this address:

We request that the aforementioned domain(s) are redirected to the PIPCU Warning Page located at IP address:

Nevertheless, this practice seems to have ceased, as the web address has ceased to respond. 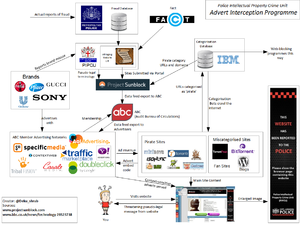 PIPCU maintains the Infringing Website List, [19] effectively a secret blacklist of websites accused of facilitating copyright infringement. Digital advertisers can apply for access to the list with the intention that they cease advertising on them.[20] The list is created by IBM crawling and categorising web pages[21] and is verified by the City of London Police.[22] It was reported to contain "around 70 websites" in July 2014.[23] The content of the list is not made available to the public, and FoI requests are rejected[24] citing the Section 30 exception for investigations.

In July 2014[25][26] PIPCU began replacing advertisements on sites listed on the "Infringing Website List" with warnings that the site was breaking the law. (examples)

In 2016 the Gambling Commission announced new licensing conditions on gambling operators that would prevent them from advertising on sites "providing unauthorised access to copyrighted content"[28] and advises the use of the Infringing Website List for compliance.

The operator of the proxy service Immunicity was arrested in August 2014 - and, as with previous sites, the domain was pointed to PIPCU. The domain expires in 2015, after which it was registered by a third-party.

Both Operations Ashiko (trade mark) and Creative (copyright) generate requests for domains to be removed from their owner’s control.

In October 2013 PIPCU sent an email to DNS registrar EasyDNS demanding that they redirect a specific domain to an IP address (previously 83.138.166.114) describing the domain as being under criminal investigation.[29]

Over its first year, over 2000 co.uk domains were suspended at PIPCU's request.[30] Most of these requests related to Ashiko.

Note that these make the argument that seizures or takedowns may be needed in order for the domain provider or host to avoid committing an offence under Section 328 of the Proceeds of Crime Act 2002.

"PIPCU is working to remove payment provisions from infringing websites using money laundering legislation, and in 2014 removed 4,650 offending sites with a ‘.co.uk’ address."[31]

PIPCU has formal agreements with:[32]