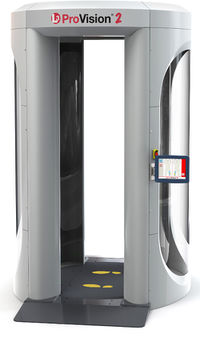 Full-body scanners are currently in use at airports around the UK, Europe and the world as part of the security screening process. These devices use microwave radio emissions that are capable of penetrating clothes and reflect back off the body and concealed objects to detect objects on a person's body without physically removing clothes or making physical contact, performing a virtual strip search.

Clothing and many other materials are translucent to EHF radio frequency bands, including the 24–30 GHz band emitted by millimeter-wave (microwave) scanners.[1] It is the millimeter-wave variety of scanner that is used in UK airports.[2] With these scanners, the millimeter wave is transmitted from two antennas simultaneously as they rotate around the body. The wave energy reflected back from the body or other objects on the body is used to construct a three-dimensional image.

You can refuse to use the scanner and instead opt for a private search.[3] Security staff may resist your request to opt-out.[4] Passengers may be selected due to the metal detector being activated or due to a random selection.

"Our need for security cannot justify invasion of privacy. Our citizens are not just objects, but they are human beings. We should never be driven by fear, but by values on which the union is founded." - Ms. Viviane Reding, EU Justice Commissioner (2010-2014)

The Equality and Human Rights Commission has argued that full-body scanners are a risk to human rights and may be breaking the law.[5] 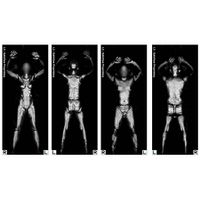 While the machines currently deployed at UK airports, like the L3 ProVision series, have software installed that performs post-processing on the image to display only a mannequin on the screen with areas of concern highlighted, the scan itself is still capturing the detail shown in the image to the right. The screen fitted to the scanner provides only a computer processed view of the raw image data collected by the scan.

As passengers are not made fully aware of how the scanners operate, and may even be told by the operator that the scanner does not collect data that can be used to create a nude image as all the operator sees on the attached screen is the mannequin, it is not possible to meaningfully receive consent from the passenger for the scan to be performed. This would mean that data that can be converted into a nude photograph is being generated without consent, and may constitute an offence under UK law. This also violates the passenger's right to exercise control over what happens to their body.

These scanners are also advertised to have upgradable software[6], indicating an easy path to allow for these scanners to store these images or have them viewed at a remote location without the passenger's consent as an after-market feature.

However the airports may describe it, they are strip searching passengers en masse. Technology has made it easy for them to do this quickly and in a way that hides the true nature of the search from the passenger.

Scholars from multiple Muslim-American groups have found that the full-body scanners contradict the teachings of the Muslim faith.[7]

"Islam highly emphasizes haya (modesty) and considers it part of faith. The Quran has commanded the believers, both men and women, to cover their private parts." - from a decree issued by the The Fiqh Council of North America

Dubai's airports have not installed these scanners as the head of airport security believed they contradict Islam.[8][9] Muslim passengers in the UK may be given the choice between submitting to these intimate scans which contradict their religion or not being able to fly.

The scanners have two modes of operation available to the operator in the security area. As they perform automated analysis of the scan in order to highlight areas of concern on the mannequin, they require a baseline from which to work. This baseline is a "normal" male and a "normal" female body and includes the body contours that would be expected from people of those genders.

Transgender women wearing breast forms/padding or transgender men wearing a binder and/or a prosthetic will find that these are highlighted as "anomalies", to use the word found in much of the L3 documentation. A person's genitals, gender or sex should not have to be revealed in a routine screening, or even in a more thorough search. The scanner will highlight these items regardless and in almost all cases the person will be subject to further screening and/or questioning.

Persons with urostomy or colostomy

A urostomy or colostomy bag being worn by a person that has undergone surgery will also be highlighted as an anomaly by the scanners. This means that the person will have to undergo further screening and answer potentially humiliating questions.

Given the level of invasiveness of the body scans, a person that is using these may experience serious psychological effects. This will be the case especially where a person is a regular flyer and/or a member of a minority group that is discriminated against by the process.

Both children and adults are screened using the millimeter-wave scanners at UK airports, which necessarily means that nude images of children are being produced. This is potentially a criminal offence under the Protection of Children Act 1978[10]. From that Act:

1(1) It is an offence for a person — (a) to take, or permit to be taken or to make, any indecent photograph or pseudo-photograph of a child

As it is also an offence to permit an image to be taken, parents that allow their children or other children under their care to be scanned using a millimeter-wave scanner may be committing an offence under the Protection of Children Act.

The Sexual Offences Act 2003 raised the age of a child from 16 to 18 in the interpretation of the Protection of Children Act.

While the Protection of Children Act does not provide a definition of indecent, in the case of R v Graham-Kerr (1998) the Court of Appeal held that the motivation of the photographer had no influence on the decency or otherwise of the photographs taken; a photograph is an indecent photograph of a child if it is indecent, and if it shows a child. This decision does not necessarily mean that the images captured by millimeter-wave scanners are indecent and this is a matter that is yet to be decided in court.